St. Paul’s Parish was created in 1704 from St. Peter’s Parish in New Kent County, VA. In 1720 the parish boundaries also became those of Hanover County. Two Churches of England edifices existed in the St. Paul’s Parish at the time of its creation. One was near the present day community of Old Church and the other near the present day Hanover Courthouse. By 1724 the Parish, which was 60 miles long and 12 miles wide, had outgrown itself and a new parish, St. Martin’s, was formed from its western end. In 1729 the church building near the Courthouse was replaced by the church known today as Slash Church. The Rev. Patrick Henry (uncle of the famous patriot) was the rector of St. Paul’s Parish from 1737 until 1777. Toward the end of his tenure a new brick church was constructed. Its location is unknown today.

After the American Revolution, the work of the Church of England in rural Virginia was put to an end. Slash Church was used by the Methodists and Disciples of Christ. Today it is a congregation of the Disciples of Christ. It was not until 1836 that services began to be held in the Hanover Courthouse area again. In 1840 the Bishop of Virginia laid the cornerstone of a new church on the site of the present day St. Paul’s. The new brick church was consecrated in 1845. It was in the thick of things during the Civil War as the Courthouse area changed hands between Union and Confederate forces. During the Battle of Hanover Courthouse the church’s Bible was stolen. It was found in a California bookstore in 1967 and returned to the church. In 1893 following the annual Christmas Pageant, the church burned down. In 1895 a new church was built on the same foundations in the late Gothic Revival style. Additions for offices, classrooms and a parish hall were completed in the 1930’s, 1960’s and in the first decade of the 21st century. St. Paul’s Church, Hanover is a Virginia Historic Landmark and on the National Register of Historic Places. 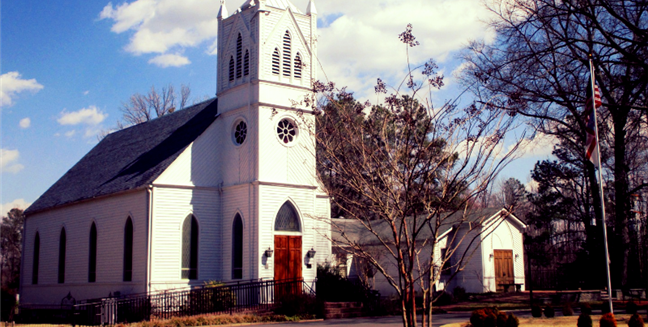